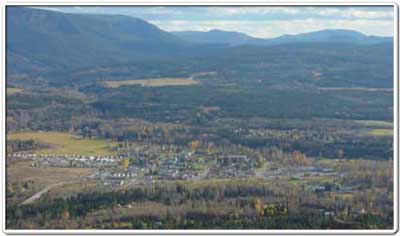 Incorporated in 1957, Houston has a total land area of 72.83 square km which makes it the largest area in the regional district.
The two mills in Houston, Canfor and Houston Forest Products, are the largest employers in Houston. Between the two mills 555 people are employed, as well as a number of contract positions.  Combined they have an annual payroll of $45 million. The mills estimate that their contracted activities such as logging, trucking, road construction, and silviculture support an additional 550 jobs in the region.

Houston is located in a region of heavy mineralization. Huckleberry Mines, an open pit copper mining operation, is located 125 km south of Houston.  The mine employs 230 people and in January 2012 it was announced that 70 new positions will be created and the life of the mine will be extended to 2021.